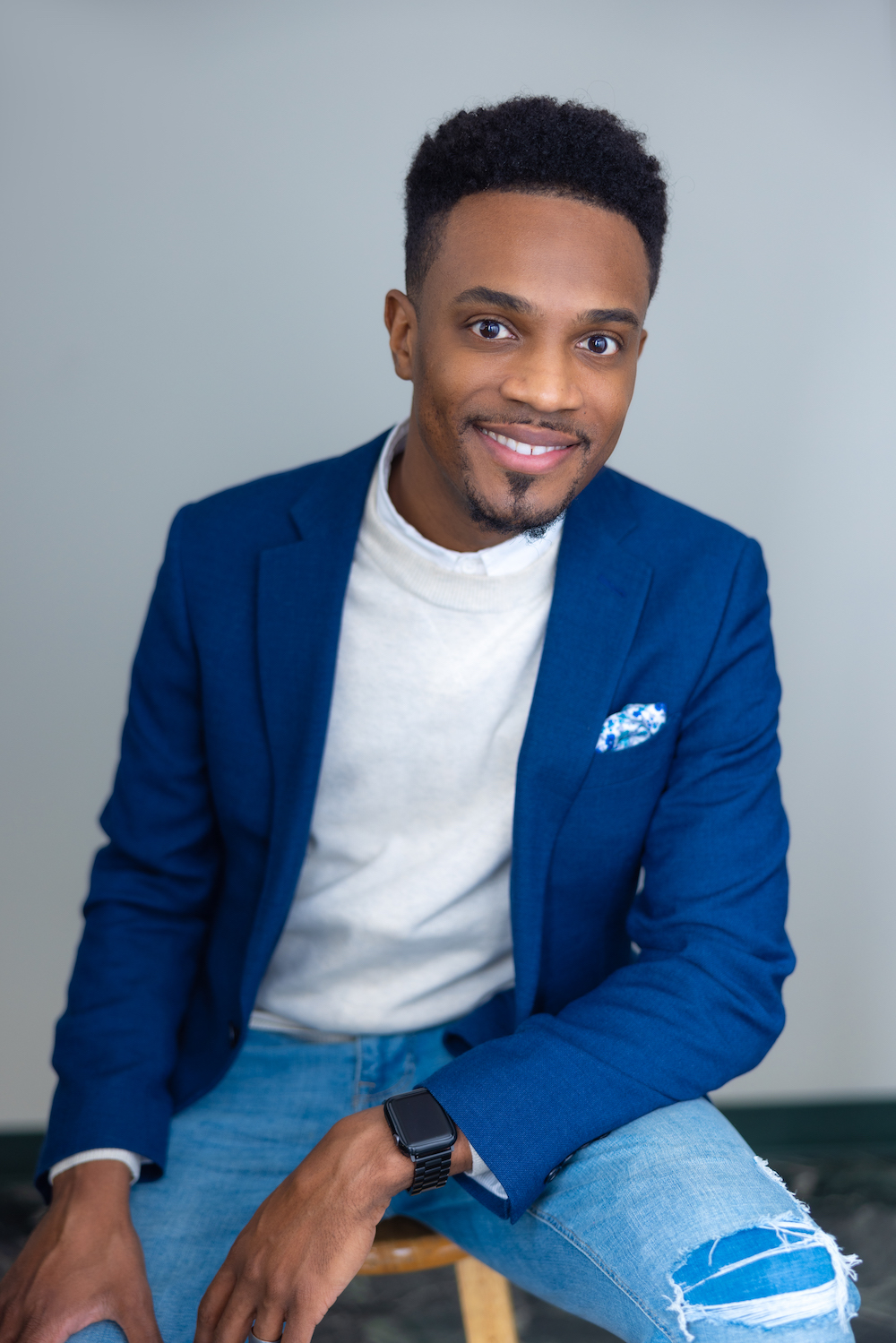 Tyrus Bush is a multi-talented singer, musician, writer, producer, media personality, and preacher whose music career began when he was just 9 years old.  Born and raised in New Jersey, Tyrus’ affinity for music was revealed when he was 4 years old after receiving his first Casio keyboard.  Though classically trained, his musical roots were primarily established while he and his family attended church in Trenton, NJ where his uncle is pastor. There, he had the opportunity to explore and refine his gifts in music and ministry.  At 8 years old, he founded a five-member, all-male singing group managed by his father.  Subsequently, this group received local recognition, exposure, and the opportunity to work with gospel legends Rev. Timothy Wright and Bishop Rance Allen and tour with “Willie Neal & The Gospel Keynotes” and “The Mighty Clouds of Joy”. By the age of 12, Tyrus was the church’s full-time musical and choral director and continued to pursue music, acting, and ministry as his calling.

Embarking on solo endeavors as a singer and musician, at age 16, Tyrus began to spread his wings appearing in a series of small stage productions, talent expos, and local events and regional competitions. In 2002, he became a finalist on season two of the TV show, American Idol.  In this same period, he went on to perform at New York’s famous Apollo Theater on Showtime At The Apollo’s Amateur Night competition.  He received Top Dog Status by winning five consecutive times singing and playing Smokie Norful’s hit “I Need You Now”. Tyrus since collaborated with producers, writers, and artists such as Stanley Brown, Rodney "Darkchild Jerkins", Fred Jerkins III, and LaShawn Daniels, just to name a few. His most recent work, “Prayer Changes Things”, is a passionate ballad for Shirley Caesar on her 2018 hit album, Fill This House.

Tyrus is passionate about expanding the musical presence and the reach and impact of his ministry.  He lives his core belief that “we are blessed to be a blessing” and focuses on sharing his gifts to initiate change, inspire hope, and impact lives in the name and through the power of Jesus.

We believe that the Holy Bible was written by men divinely inspired, and is a perfect treasure of heavenly instruction: that it has God as its author, salvation for its end, and truth without any mixture of error, for its matter; that it reveals the principles by which God will judge us; and therefore is, and shall remain to the end of the world, the true center of Christian union, and the supreme standard by which all human conduct, creeds and opinions should be tried.

We believe that there is one, and only one, living and true God, an infinite, intelligent Spirit, whose name is Jehovah. The Maker and Supreme Ruler of heaven and earth; inexpressibly glorious in holiness and worthy of all possible honor, confidence, and love; that in the unity of the Godhead there are three persons, the Father, the Son and the Holy Ghost; equal in every divine perfection, and executing distinct by harmonious office in the great work of redemption.

Of the True God

We believe that a man was created in holiness, under the law of his Maker; but by voluntary transgression fell from that holy and happy state; in consequence of which all mankind are now sinners, not by constraint, but by choice; being by nature utterly void of that holiness required by law of God, positively inclined to evil; and therefore under just condemnation to eternal ruin, without defense or excuse.

Of the Fall of Man

We believe that the Salvation of sinners is wholly of grace; through the mediatorial offices of the Son of God; who by the appointment of the Father, freely took upon him our nature, yet without sin; honored the divine law by his personal obedience, and by his death made a full atonement for our sins; that having risen from the dead is now enthroned in heaven; and uniting in his wonderful person the tenderest sympathies with divine perfections. He is every way qualified to be a suitable, a compassionate, and an all-sufficient Savior.

Of the Way of Salvation

We believe that the Great gospel which Christ secures to such as believe in him is Justification; that Justification includes the pardon of sin, and the promise of eternal life on principles of righteousness; that it is bestowed not in consideration of any works of righteousness which we have done, by solely through faith in the Redeemer’s blood; by virtue of which his perfect righteousness is freely imputed to us of God; that it brings us into a state of most blessed peace and favor with God, and secures every other blessing needful for time and eternity.

We believe that the blessings of salvation are made free to all by the gospel; that it is the immediate duty of all to accept them by a cordial, penitent, and obedient faith; and that nothing prevents the salvation of the greatest sinner on earth but his own inherent depravity and voluntary rejection of the gospel; which rejection involves him in an aggravated condemnation.

Of the Freeness of Salvation

We believe that, in order to be saved, sinners must be regenerated or born again; that regeneration consists in giving a holy disposition to the mind; that it is effected, in a manner above our comprehension, by the power of the Holy Spirit in connection with divine truth, so as to secure our voluntary obedience to the gospel; and that its proper evidence appears in the holy fruits of repentance and faith and newness of life.

Of Grace in Regeneration

We believe that Repentance and Faith are sacred duties, and also inseparable graces, wrought in our souls by the regenerating Spirit of God; whereby, being deeply convinced of our guilt, danger and helplessness, and of the way of salvation by Christ, we turn to God with unfeigned contrition, confession, and supplication for mercy; at the same time heartily receiving the Lord Jesus Christ as our Prophet, Priest and King, and relying on him alone as the only and all-sufficient Savior.

Of Repentance and Faith

We believe that Election is the eternal purpose of God, according to which he graciously regenerates, sanctifies, and saves sinners; that being perfectly consistent with the free agency of man, it comprehends all the means in connection with the end; that it is a most glorious display of God’s sovereign goodness, being indefinitely free, wise holy and unchangeable; that it utterly excludes boasting, and promote humility, love, prayer, praise, trust in God and active imitation of his free mercy; that it encourages the use of means in the highest degree; that it may be ascertained by its effects in all who truly believe the gospel; that it is the foundation of Christian assurance; and that to ascertain it with regard to ourselves demands and deserves the utmost diligence.

Of God's Purpose of Grace

We believe that Repentance and Faith are sacred duties, and also inseparable graces, wrought in our souls by the regenerating Spirit of God; whereby, being deeply convinced of our guilt, danger and helplessness, and of the way of salvation by Christ, we turn to God with unfeigned contrition, confession, and supplication for mercy; at the same time heartily receiving the Lord Jesus Christ as our Prophet, Priest and King, and relying on him alone as the only and all-sufficient Savior.

Of Repentance and Faith

We believe that Sanctification is the process by which, according to the will of God, we are made partakers of his holiness; that it is a progressive work; that it is begun in regeneration; and that it is carried on in the hearts of believers by the presence and power of the Holy Spirit, the Sealer and Comforter, in the continual use of the appointed means, especially the word of God, self-examination, self-denial, watchfulness and prayer.

We believe that a visible Church of Christ is a congregation of baptized believers associated by covenant in the faith and fellowship of the gospel; observing the ordinances of Christ; governed by his laws; and exercising the gifts, rights, and privileges invested in them by his word; that its only Scriptural officers are Bishops, or Pastors, and Deacons, whose qualifications, claims, and duties are defined in the epistles to Timothy and Titus.

Of a Gospel Church